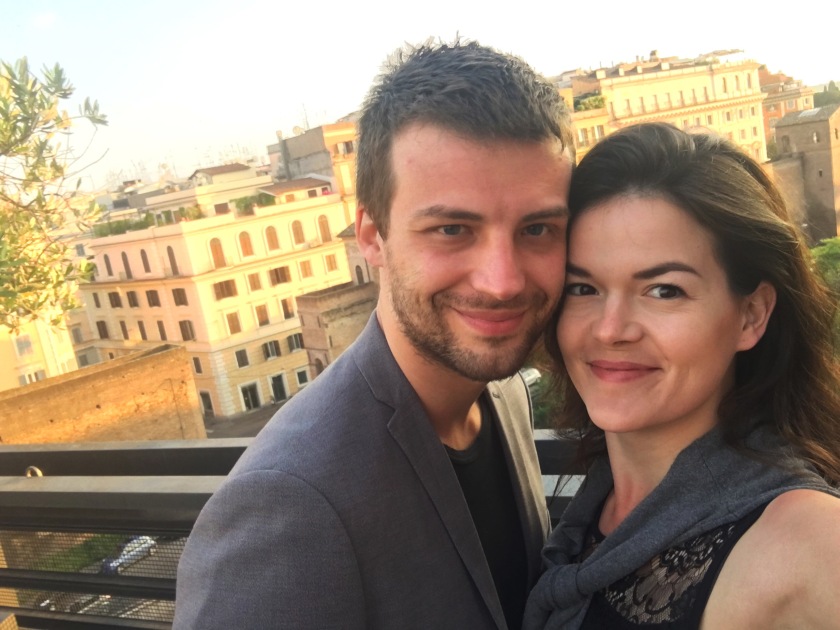 Buongiorno! One week ago I was still in the beautiful and warm city of Rome. It was my first time there and I was lucky enough to have my boyfriend and his parents with me, who had been there before. I want to start off by thanking them for showing me so much of Rome in such a short time! What are the must sees in Rome? I’ll tell you!

We arrived late on Wednesday night which meant that after a good night of sleep and a extensive breakfast at our wonderful NH hotel we were ready to discover the city! My first impression was that traffic in Rome is very chaotic! In Amsterdam, cyclists are King. In Rome, cycling means you are suicidal! It is really a bit survival of the fittest here. I don’t recommend renting a car here – just take a taxi.

That being said – our hotel was at walking distance from the centre so we just took the good old leg taxi. The goal of our trip was to see as much as we could the global beauty of Rome, without going in to too much detail. On every corner of the street you discover something beautiful anyway. Rome is one big open air museum.

One of the first things we passed by, were the famous Spanish steps. As you can see: on a sunny day it can get quite crowded. Nevertheless it was a very beautiful view! I realise now I didn’t take a picture of the fountain in front of me here, because it had a nice legend to it. Because of a flood of the river Tiber, a boat was stranded in the middle of the square, and they built a remembrance fountain on this square for it – the Fontana della Barcaccia.

Museum of the Ara Pacis

The ones who know me, know that I am not much of a museum fan. I wouldn’t really make it a priority to visit them when I go to a city. But sometimes, even museums surprise me. Like this one. The only thing you find in it, is  this altar. The Ara Pacis was dedicated to the Roman goddess of peace: Pax. The history of the altar is interesting, so worth a visit! 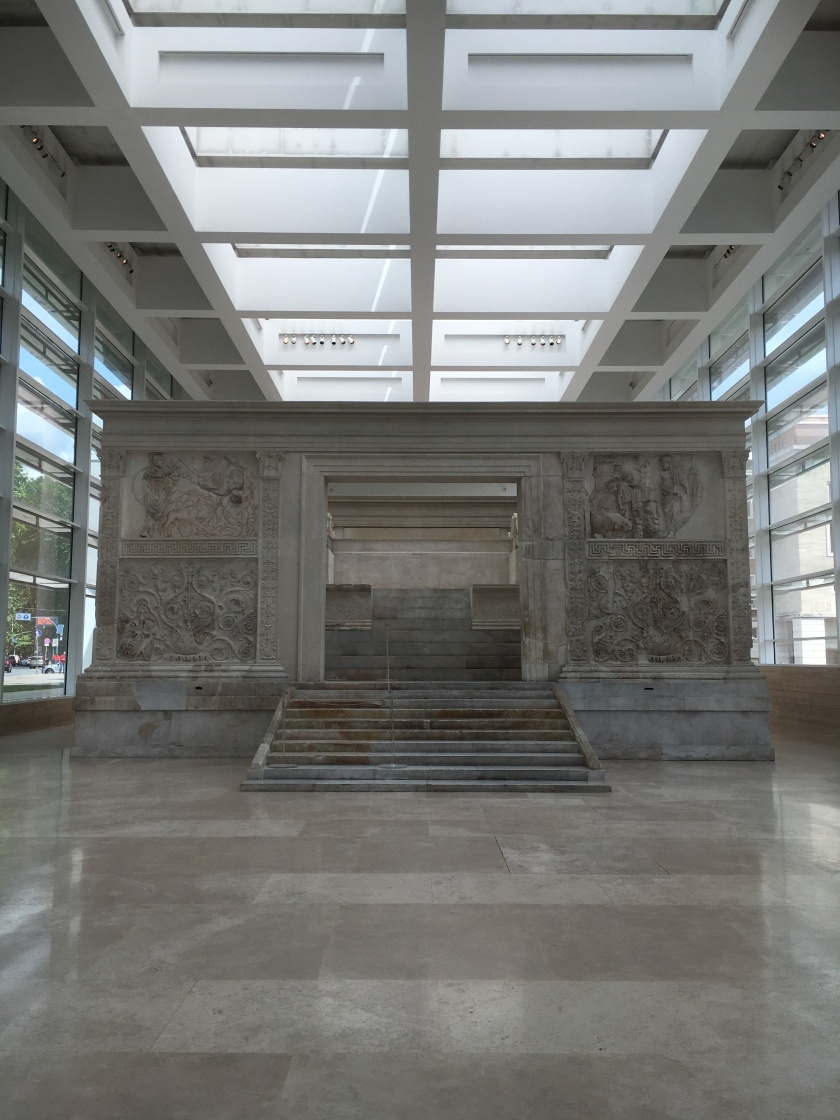 Very high on my bucketlist of things I really wanted to see in Rome was the Trevi fountain. And woah: it did not dissapoint! It was even bigger than I expected. You would expect it to be at a huge square, but it’s actually in a very small one! Hence why it looks and feels so crowded:

The legend says, if you throw a coin over your shoulder into the fountain whilst making a wish, it will come true! Because so many people do it, about €1,5 million euro is collected from the fountain yearly. The money is used to subsidise a supermarket for Rome’s needy.

Tip: visit the Trevi fountain in the late evening – it will be much more quiet and magical!

Personally, I had never heard of this place before. But I learned that this castle is a former Mausoleum of Roman Emperor Hadrian. He had it built for himself and his family. A big family he must have had, I think! Later, it was used by the popes as a fortress and castle. In times of war, they would use the covered fortified corridor to go from the Vatican to the castle. In the back on the left of the picture, you can see a bit of the Vatican!

St.Peters Square and the Vatican

Also visiting the Vatican was high on my bucketlist. Walking towards it from the castle made it seem immense and very impressive, but when you are right in front of it, it looks much smaller, no? 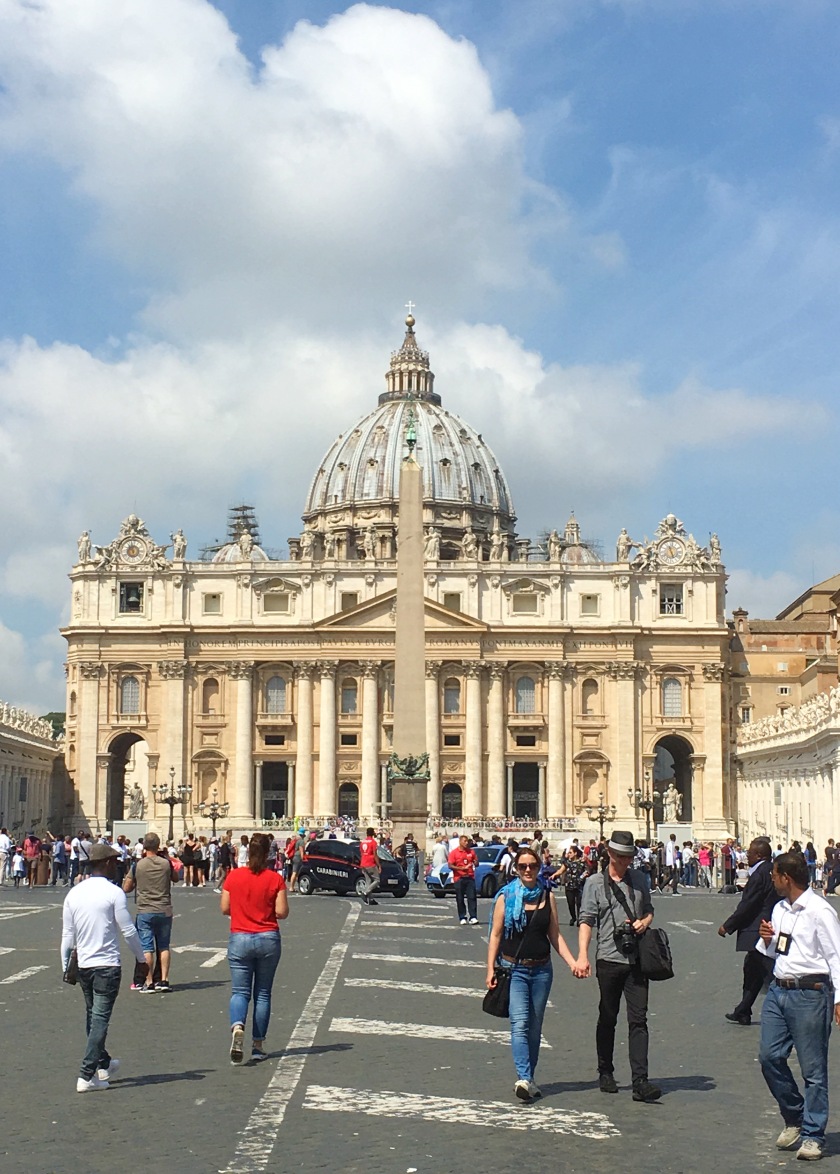 On both sides you have the giant order of colums that are hugging the St-Peters Square. Those I found to be very impressive and beautiful: 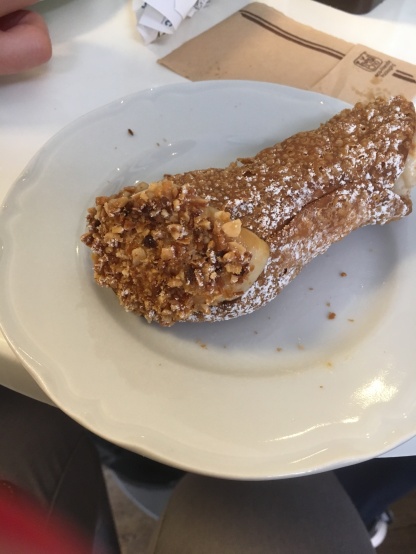 Another beautiful building we passed but did not enter was the Panteon. The former temple – now church – is one of the best-preserved Ancient Roman buildings. The most fascinating part of the Pantheon is its giant dome, with its famous hole in the top. The diameter of the dome is 43.30 meters! The 16 massive Corinthian columns supporting the portico weigh 60 tons each. My mind is blown in how they ever built this masterpiece… 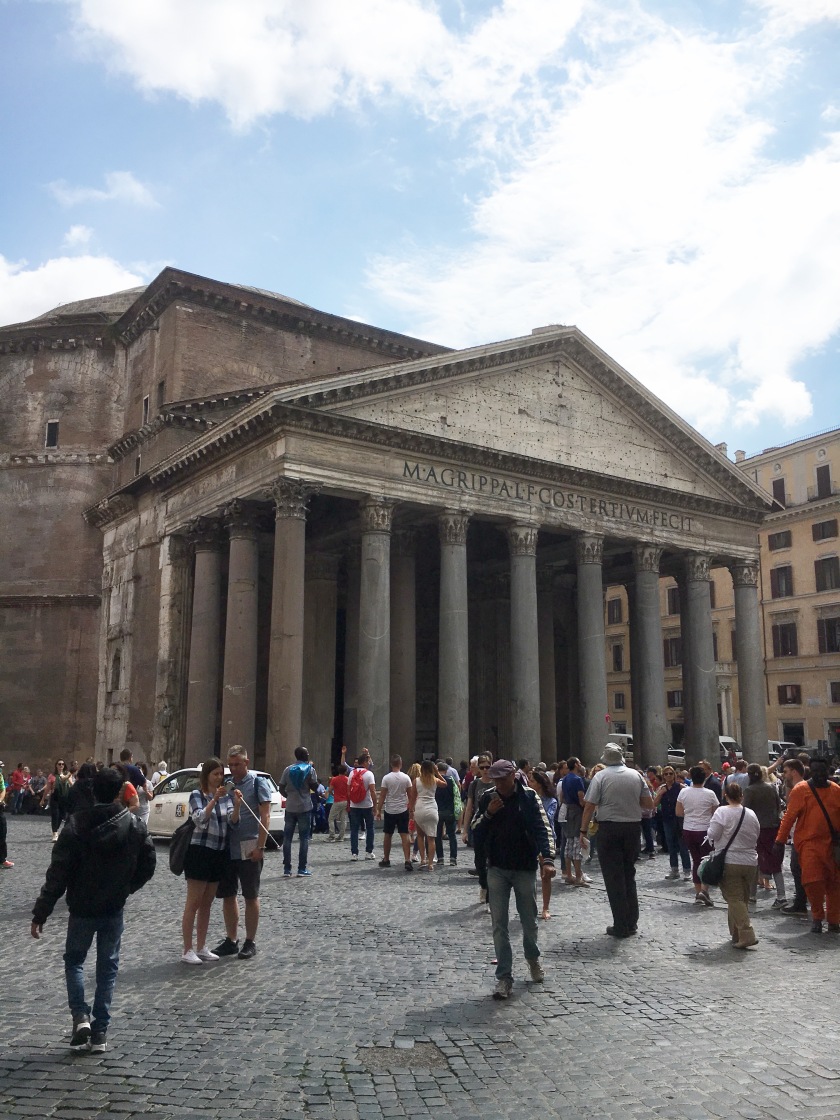 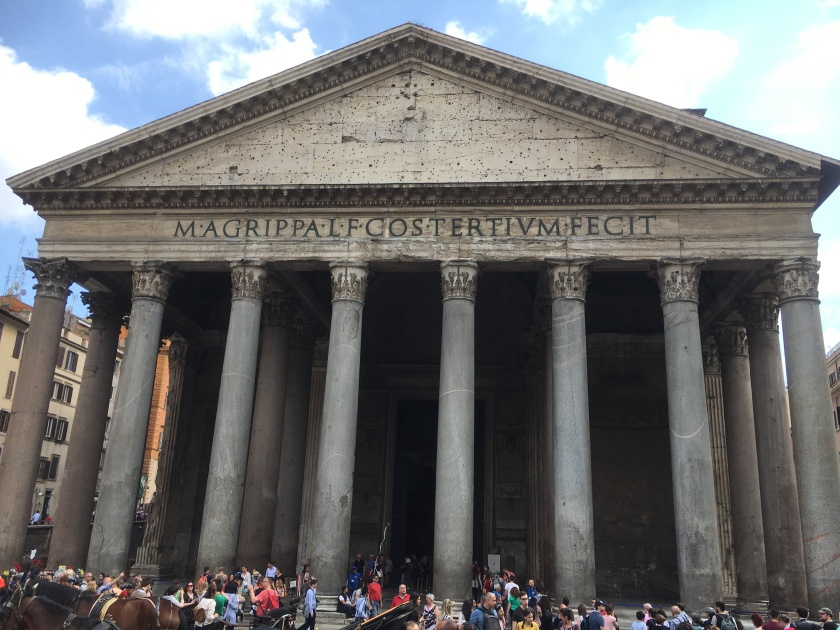 Also this monument was unknown to me, but very impressive to see! It is a National Monument built in honour of Victor Emmanuel, the first king of a unified Italy. The monument – which is the largest in Rome was controversial since its construction destroyed a large area of the Capitoline Hill. It has a very bright white colour that doesn’t really match the generally brownish buildings surrounding it. But nevertheless: a beautiful monument in my opinion! 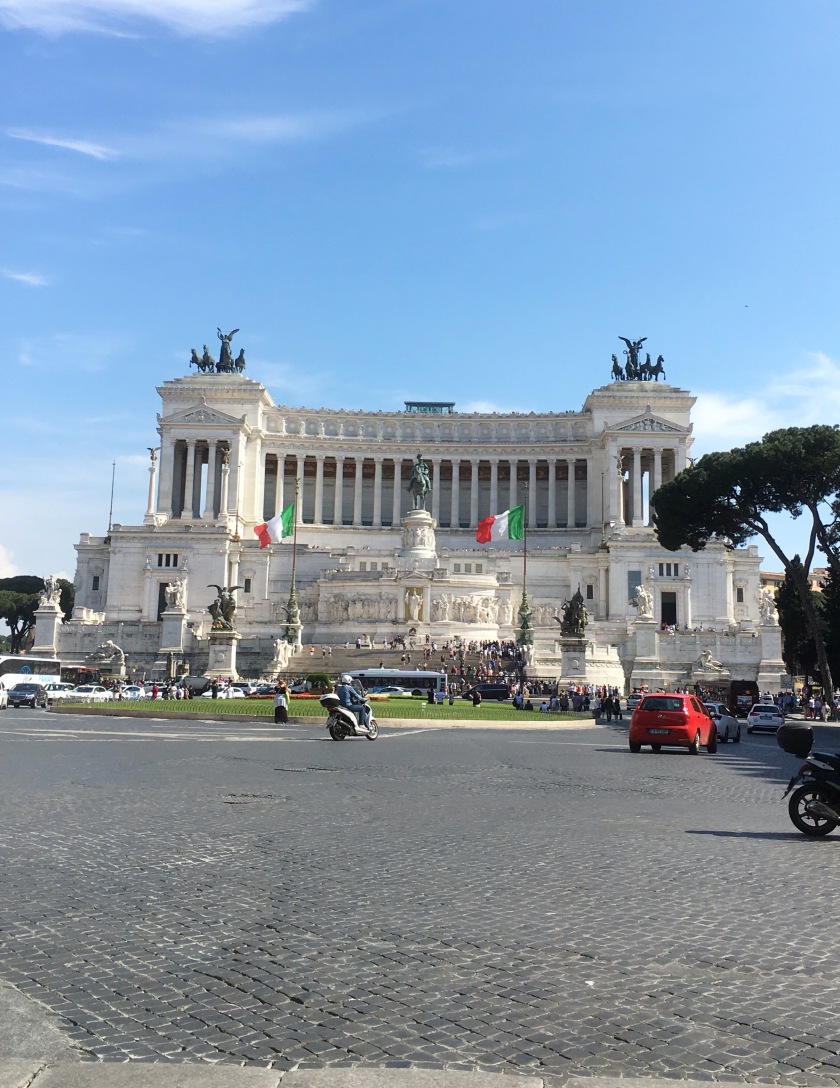 When walking in the direction of the Colosseum, you will pass by the Trajan’s Column for sure. From afar you can’t really tell what is so special about it but if you look more closely, you will notice that it is completely engraved with a spiral bas relief, which describes the epic wars between the Romans and Dacians. The column shows 2,662 figures, and 155 scenes; Trajan himself appears on the column 58 times.

In front of the museum, you will discover something that might remind you of the Arc de Triomphe if you have ever been to Paris. This also is a victory arch, built to commemorate Constantine I’s victory. Go inspect it from a bit closer! 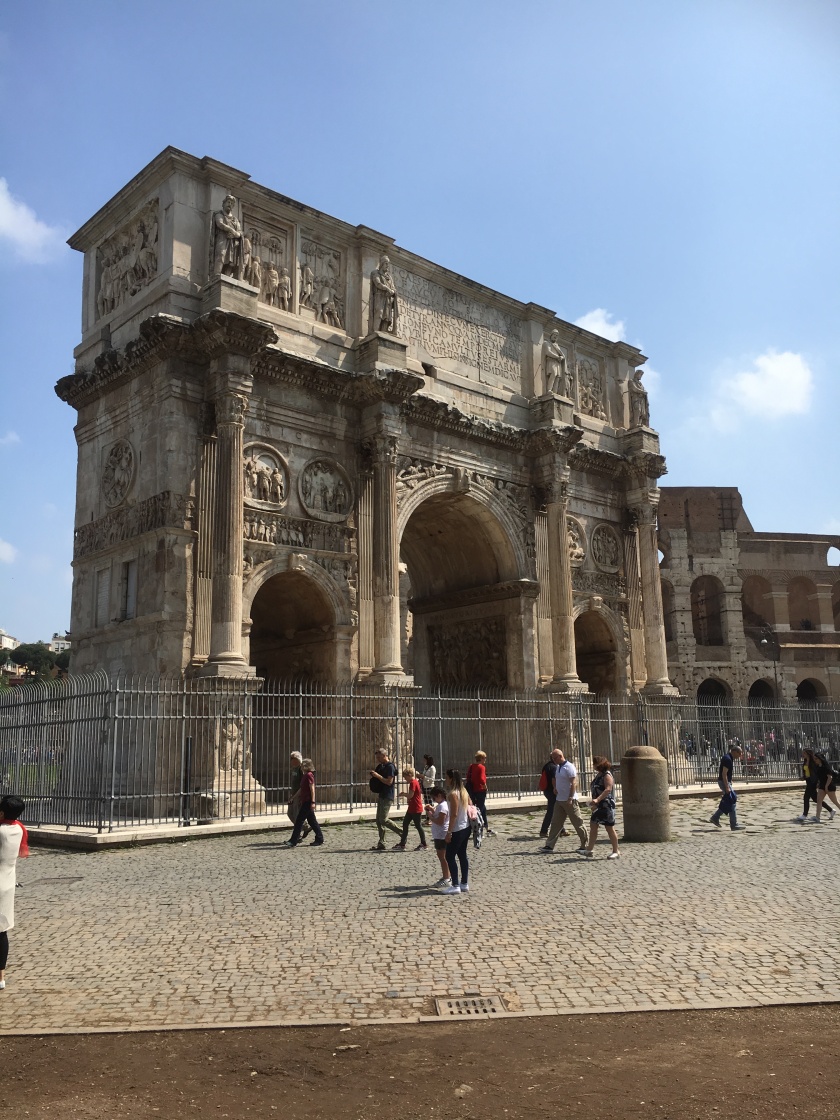 This place is surrounded by the ruins of several important ancient government buildings. For centuries the Forum was the center of day-to-day life in Rome. About everything happened here: public speeches, criminal trials and even gladitorial matches! Thise place breathes history. You can imagine it happening. 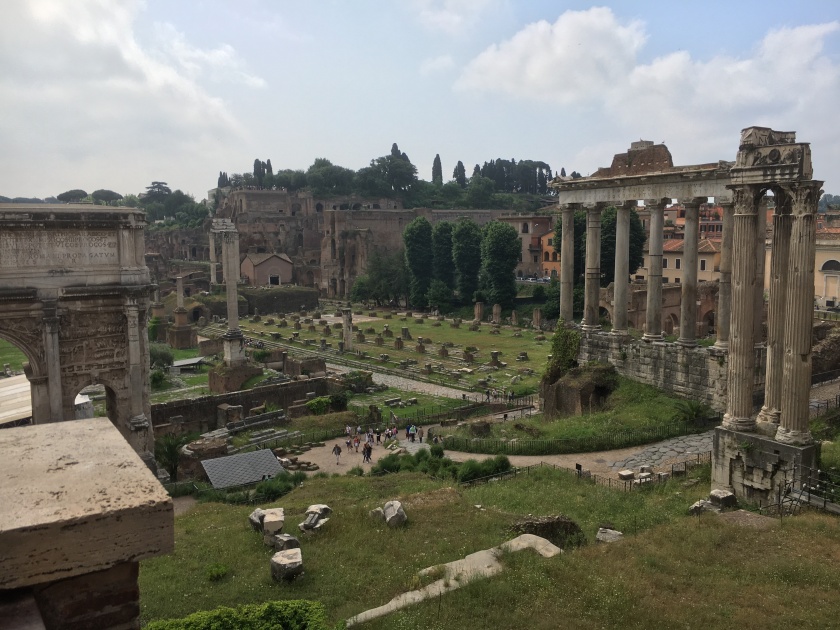 We saved the best for last! On Saturday, we visited the Colosseum. I recommend to buy your tickets upfront, since the ticket buying queue can get quite long and you are in the full sun. It is really so impressive to approach the Colosseum and already imagine all the fights that happened in this historic building.

This largest amphitheater of the world was built in only 9 years and offered place to 50,000 people. It would only take about 20 minutes for everybody to find their seat, due to 84 gates.  I think we should take an example from that 😉 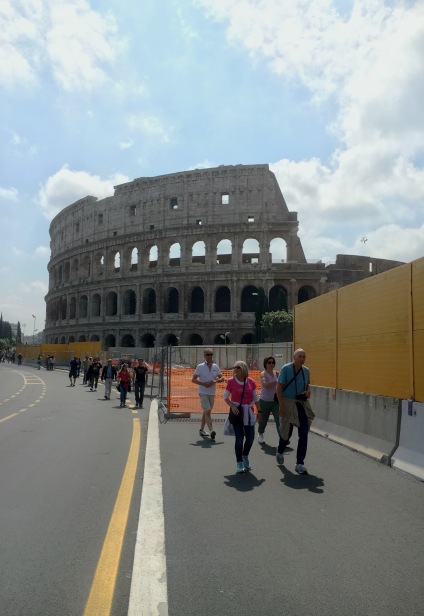 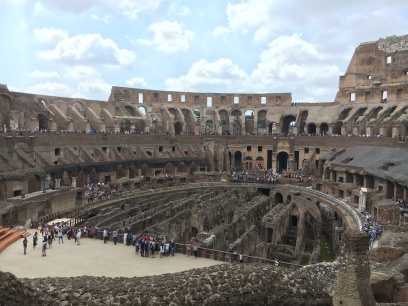 You can really imagine all the gladiator games and animal slaughter happening here! Legends say that when a gladiator lost his fight, he would get either the thumbs up, or thumbs down signal from the Emperor – meaning he would be condemned to death or spared. I found it really interesting to read more about the different types of battles that happened here! 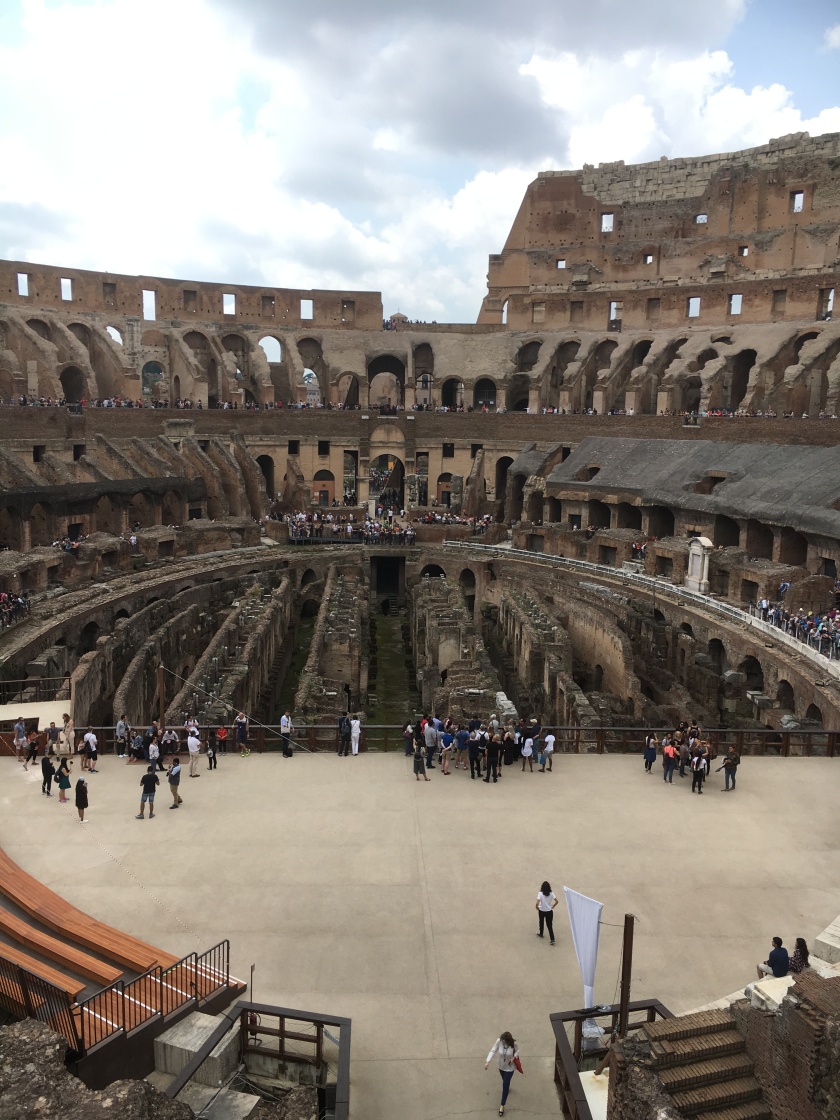 The day of our departure, we took a quick walk in the garden of Villa Borghese. And wow! I wish we discovered this sooner. It is really an oasis of peace and quiet in the middle of all this chaos. I really recommend to take some time for a walk here. You will not be dissapointed! 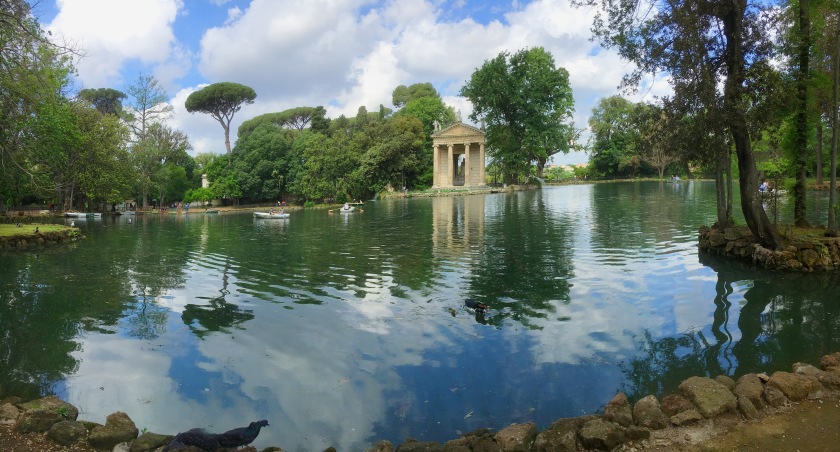 So – this was my visit to Rome in a nutshell. I will write a different blog about “What to eat in Rome” since I think this is a interesting topic as well 😉

Until next time! Xoxo